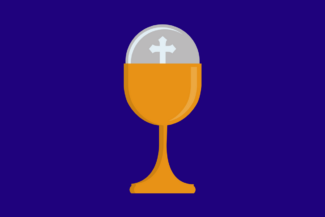 Digging a little deeper, the differences between Catholic and Lutheran belief start to emerge when we look at the terms each use to describe the metaphysical reality of Christ’s presence in the Eucharist. Catholics call this transubstantiation, which means that during the Eucharistic Prayer the substance (or essence) of the bread and wine is fully changed into the body and blood of Christ, while the outward appearance of bread and wine (what they look, feel, and taste like) remains the same as before. A colloquial metaphor for this is when a man has a child he becomes a father. This is more than simply a change in nomenclature; he is now very different in the essence of who he is, even though he looks and sounds the same on the outside.

As you can see, these are fairly nuanced differences, but there are implications at the practical level. While both Lutherans and Catholics will bring Communion from the church to members of the community who are sick, Catholics maintain the practice of reserving the Communion bread in the tabernacle, which becomes a place of prayer and devotion. Lutherans do not hold the same belief that the presence of Christ continues in the bread and wine after the time and place of the celebration of the Eucharist.

A final important distinction is that while most Lutheran communities would welcome anyone to partake in Communion, Catholics hold that in order to receive Communion at Mass one must be fully in Communion with the Catholic Church and in a state of grace (have not committed any grave sins that break Communion with God and the Church).

Certainly, there are disagreements and divergent thinking around the theology and practice of Communion between Catholics and Lutherans. But we look forward to the day, after further prayer, dialogue, and understanding, when all Christian believers can gather around the one Table of the Lord.

*The references to Lutherans and Lutheran communion in this article refer to the Evangelical Lutheran Church in America.