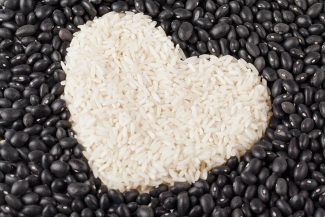 It was the end of another typically hectic day in our house. I was running behind schedule, my husband was running late, the baby’s nose was running, and my toddler was running around in circles. He stopped only to utter those famous words:

What was supposed to be for dinner was a stuffed chicken and broccoli dish that, like both the grocery shopping and my children’s naps, never managed to materialize. At this point, I had no idea what was in the fridge let alone what was on the menu. I took inventory of our sparse pantry. The only thing I could come up with was…beans and rice.

In less than 20 minutes (thank you, quick cook brown rice!) and in one pot, dinner was on the table. As I started scooping out everyone’s portion, I braced myself for protest, demand for more, and accusations of not enough.

“What is this?” said my son, pointing to his spoon.

“Well it’s only beans and rice.” I said.

And so, too, did the rest of the family. Everyone ate their share without complaint. No one went hungry. The Pinterest police did not come knocking on my door.

That’s how only beans and rice, the dinner tradition that saved my sanity and gave us a new appreciation for food and family, started.

And it couldn’t have come at a better time. I had been struggling with ways to deal with Lent as a parent, to teach my children about this season. I wanted, in toddler-appropriate and child-friendly ways, to explain to my children about sacrifice, repentance, almsgiving, and the solemnity of the occasion. Unlike the more joyful parts of the liturgical calendar, creating something fun-filled and game-like seemed inappropriate. Eating only rice and beans has been part of the solution. It has become a weekly menu item meant to keep us grounded in what really matters.

In the grand scheme of things, I know it’s not a drastic change. I know many people around the world would be delighted to indulge in what we deem a simple meal. I’m not pretending that this weekly dinner is a sacrifice. But it has been a reminder about what is important. By eating only beans and rice, we are stepping away from extravagance, from Pinterest-inspired meals, and from stressing whether or not the children will like what they eat, and are instead focusing on the fact that we all have food. I spend less time in the kitchen and more time at the table. I spend less time preparing for my family and more time with my family. By spending less, by doing less, we are gaining more. Our family dinner of only rice and beans is a simple exercise, reminding us that simple is enough.