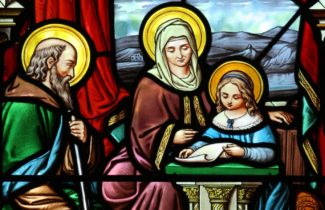 Mary’s parents are St. Joachim and St. Anne. What we know about them comes from tradition and from apocryphal writings (writings that are in the style of sacred Scripture but are not believed to have been divinely inspired). The Protoevangelium of James (written around A.D. 150) describes them as a wealthy couple who were infertile for many years, leading Joachim to fast for 40 days and nights in hopes of having a child. Mary’s birth was announced by an angel, leading to much rejoicing on the part of Joachim and Anne. The story also explains that Mary was consecrated to the Lord and went to live in the temple at the age of 3.

It’s hard, from our perspective, to know how much of this is historically accurate. It seems fair to say that though some of the story is probably embellished by imagination, there may be elements of truth in it. It’s fairly likely that the names of Joachim and Anne would have been remembered accurately over the years, even if the precise details of their lives were not. As the grandparents of Jesus, St. Joachim and St. Anne have long been honored by both the Eastern Church as well as by Catholics.

Catholics observe the feast of Joachim and Anne on July 26.