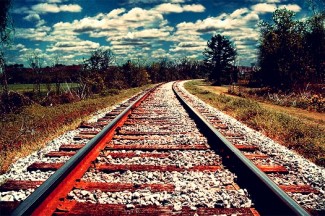 Back in 2009 I took a cross-country train from Boston to San Diego just because it had always been a dream of mine. This summer, I fulfilled the dream again with a trip by rail to the Northwest via the Empire Builder. Like most travel for me, it was spiritual — not a pilgrimage, but a more “focused realness” of God’s presence on my journey. I was not going to a sacred place. The journey itself was what was sacred.

My favorite image of God is “God the Traveller.” He’s the God of accompaniment, the one who journeyed with the 16th and 17th Century missionaries into uncharted lands, meeting strange new people, learning of God’s might and God’s personal love for each person they encountered. He’s the God journeying with pilgrims to World Youth Day, to Lourdes, France, and to the Holy Land. But the Traveller is also on family car trips to grandma’s and in the trucker’s passenger seat on a long haul across the country. Indeed, God was with me on my two summer rail journeys, four years apart.

My discovery of this God-image first happened on one of my rail legs in 2009 when my sleeping car attendant introduced himself as Jesús. It struck me again not long after the trip when a man pumping my gas had “Jesus” on his nametag. These little signs brought God into my near vision. They reminded me that God was present and watching me at each moment of my life’s journey.

On the train, this presence was especially fruitful given the amount of time I had rolling through changing landscapes of fields and forests, past rivers and desert. This year, my girlfriend Sarah and I made the trip from Boston to Portland via Chicago. The Empire Builder, which travels west from Chicago and then splits off to Portland and Seattle, is one of the most famous trains in the world. Completed in 1929 and travelling through eight states, the train goes near to the Canadian border and witnesses some of the most beautiful scenery in the country, including Glacier National Park and the Columbia River Gorge, which runs for 55 miles along the train route.

How could I not see God? It was like a retreat on rails. I could not help but sit, gazing out the windows into the glorious wilderness. We passed through the inner city of Chicago and into the metropolis of Milwaukee and then onto the back towns of North Dakota and then into the mountains of western Montana. I wondered about the people in these very different places. Does God know each of them? Does God know each heart? Each life situation? Surely. The scripture says that God even knows the number of hairs on their heads.

On board we met people from all walks of life. There was the large Mennonite family travelling to see family in Montana. At dinner one evening, out of Boston, we met a young couple on their way to an architecture conference in Chicago. One morning at breakfast we chatted with a Norwegian couple who were on their first visit to the United States. At lunch we met a 20-something whose truck broke down in Montana and was on his way to California to pick up his dad’s truck. The people we met removed the veil of homogeneity we see when we stick with people who look like us and think like us. I discovered that my automatic judgement mechanism had no place on a train that passed through the many landscapes of God’s creation, including the people.

The time on the train gave Sarah and me time to just be. We played cards, read books, chatted, and even took the time to pray together. We’ve tried to make it a habit of praying the Liturgy of the Hours together, so I brought my iPad with the iBreviary app. The trip was already sacred in its own right, but praying a more formal prayer of the Church while speeding through the middle of nowhere, brought a deeper sacredness to the journey. Even there we could unite with the larger Church, and with a community of believers and non-believers, people going different places, seeking meaning and beauty and purpose just like us.

As the journey was winding to a close, we sipped some coffee as we enjoyed the views of the snaking Columbia River, which over millions of years carved out 80 miles of canyon — just a flash in God’s time. Journeys like this put things in perspective for me. There is more to my life and more to God than what I find in my own corner of the country and in my own neighborhood. My spiritual focus is increased and I find a new angle from which to see God: the Traveller who is always with me.