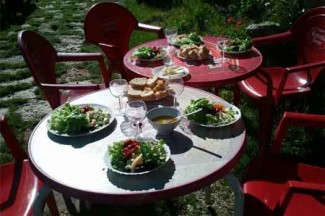 The kitchen had no stove, but that wasn’t going to stop us. “We can just make a big salad,” Philipp said. We all agreed and off we went to the only market in town. Besides the lettuce, tomatoes, and onion we bought white asparagus, zucchini, and olives — things I had never put on salads back home. But I wasn’t home. I was in Spain, walking the Camino to Santiago and preparing dinner with people I’d met less than two weeks earlier — some of whom I’d spoken with for hours, others with whom I had not shared more than a smile.

The kitchen at our albergue had just one knife but we were all still able to help with the preparations. Those with pocket knives lent them to those who wanted to cut the tomatoes and onions. Others washed and tore lettuce or distributed the olives among the seven plates.

Salad dressing was homemade — the market had none. Philipp squeezed juice from an orange we bought and combined it with some olive oil to make a lovely citrus vinaigrette. Bread was sliced. Wine was poured. We sat to eat outside under the Spanish sun remarking that, for just two Euros each, we had ourselves quite a feast.

Around our table were representatives from five countries. Our dessert of watermelon was accompanied by tunes from Margaret’s harp and Merta’s ukelele.

Indeed, after walking 12 or 15 miles you would think the last thing any of us wanted to do was prepare a meal. But all of us had chosen to forego the meal at the restaurant next door in favor of coming together at this table. There was just something about preparing a meal for and with others that none of us could turn down.

Some might see parallels to mass: a communal meal, bread, wine, music. Yes, perhaps some of the significance in these experiences for me had to do with my Catholic upbringing. But what it reminded me of most? Family dinners growing up: one sibling unloading the dishwasher, another setting the table, one running downstairs to get a can of something from the pantry, Mom cooking the meal. All us waiting for Dad to get home before we sat down to eat around the table. Perhaps a friend or two joining us. (“Because when you’re cooking for seven, what’s another one or two?” my mother theorized.) Back then, we begrudgingly helped because it was one of our “chores.” We waited for Dad because Mom told us we had to, despite how hungry we thought we were.

But for me, the real significance — both at home growing up and along the Camino — was the sharing: sharing the work of preparation, sharing our food, sharing our conversation. And sharing it with all who wanted to partake.

What shared meals are you reminded of when you read this post?