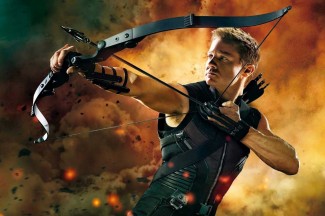 It’s certainly easy to gloss over the Avengers’ sixth member. Jeremy Renner, who plays the character, even sang a tongue-in-cheek parody about it on “The Tonight Show.” Hawkeye’s the one without any sort of superpowers. He has what some would call the least powerful weapon of anybody on the team (a bow and arrow doesn’t exactly match up to a vibranium shield or the god of thunder’s hammer). And he spent most of the first “Avengers” movie under mind control, so the audience doesn’t even really connect with who he is or what he stands for.

“Avengers: Age of Ultron” (in theaters now) shows us a different side of this hero and gives us insight into how we can be heroes, too.

In the new movie, we finally get a better look at Clint Barton, the man behind the Hawkeye persona, and by the end of it, we have a completely different perspective on him. We begin to see Hawkeye not just as the underpowered member of a super-powered team but instead, essentially, as ourselves.

During a moment of peace amidst the action-packed struggle with Ultron, Barton leads the rest of the Avengers to a safe house he keeps hidden from S.H.I.E.L.D. Here we are introduced to the family that neither the audience nor the team (save for Hawkeye’s close friend and special ops partner Black Widow) knew Hawkeye even had. As Barton talks with his wife Laura about the mission at hand, we begin to see that he is not unaware of how he stacks up to the other Avengers. In particular, the couple shares the following exchange:

Laura: I see you with the Avengers, and, well…

Clint Barton: You don’t think they need me?

Laura: Actually, I think they do. They’re gods, and they need someone to keep them down-to-earth.

Barton’s insecurity about his place on the team simultaneously cements his humanity and reminds us of our own. How often have you felt like you’re just not fitting in, like everyone around you is better, smarter, more talented, or just has some edge that you’re missing? Yet, as Laura Barton reminds us (and Clint), everyone has something to bring to the table. Even when we feel like others have talents that outmeasure our own, we must be mindful of the unique gifts and talents we possess.

President Theodore Roosevelt once famously said, “Do what you can, with what you have, where you are.” It’s this mantra that comes to mind when thinking about Hawkeye. As he tells another member of the team later in the movie, “None of this makes sense. We’re fighting an army of robots, and I’ve got a bow.”

Even though he’s not the best-equipped Avenger for the situation, Hawkeye sets a great example for us and for his teammates by putting his life on the line for the greater good and doing his best to not only combat the evil Ultron’s forces, but also to save the people who need him most. His selfless devotion and perseverance embody Roosevelt’s idea that we should not forsake the situation and circumstances we’ve been given in life, but rather make the best of them and use what we have to improve the world around us in any way we can.

Hawkeye may not be the strongest Avenger, or the smartest, and he may not have the coolest costume, but he’s just as much a superhero as anyone else on the team.