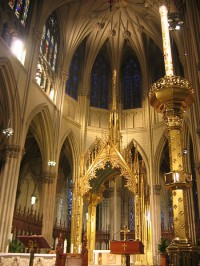 Earlier this month, I wrote about one of my resolutions to go to church every Sunday. After doing some research I was surprised to learn that there are five Catholic churches within walking distance of my apartment. Now I really don’t have an excuse to not attend.

However, when I woke up New Years Day after hosting a New Years Eve party the night before, church was the last place I wanted to be. But, when Monica told me one of our friends woke up early to head back to Jersey for church I knew I couldn’t complain, especially since the Mass I planned on attending was right across the street.

But the next Sunday I didn’t.

Feeling that Catholic guilt I’ve heard so much about but never experienced firsthand, I decided to find a Mass to go to during the week. Determined not to break my resolution I realized while attending every Sunday is ideal, sometimes life gets in the way of things. But, that doesn’t mean I have to forfeit church the entire week.

Freelancing from home gives me the flexibility to take a break during lunch and head to the 12:15 service, which I did that week and earlier today.

I know going to church every Sunday shouldn’t be a difficult thing to do, but I’m still working at it. After attending Mass once each week in January, I’m more certain I can make it work.