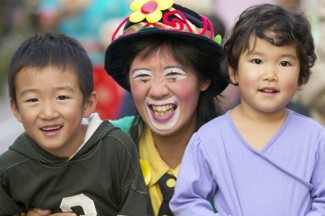 I am a perfectionist and a micromanager and am easily overwhelmed. There really is no combination that would result in a more tightly wound person. So it’s safe to say that sometimes I can get really hung up on a problem, and I can take life a little too seriously.

This is usually when something happens that is so random that it just has to be a sign for me to lighten up.

A professor once told us about a time that he was in New York City and was running late to catch a flight. A cab finally pulled over and they proceeded to La Guardia. This professor is a friendly guy. It was going to be a long drive so he tried to strike up conversation about the yoga book that was in the passenger seat, but the cab driver barely spoke English. He saw some tattoos on the man’s hands that he knew to be native to a region of Sudan that he was familiar with. Then he told us, “Only in New York can a fat-faced Irish man talk to a man from Sudan in a cab about yoga in Italian.” Seriously, an Irish man and Sudanese man had a conversation in broken Italian about yoga. Talk about random.

I find that I have moments just like this exactly when I need to have them. Really random moments that are akin to someone taking me by the shoulders and shaking me saying, “Snap out of it.”

One time a friend and I were working away with, seemingly, the weight of the world on our shoulders. The two of us were really stressed and teetering on the brink of a meltdown. All of a sudden, we heard a buzzing sound followed by the smell of smoke. We both jumped up and ran outside our house to figure out what was going on. In the furthest reaches of my imagination, I would have never guessed that the buzzing was the sound of a hair clipper, and the smoke was from a joint. But there we were staring at three teenage boys smoking pot who had plugged their clippers into an electrical socket that was on the outside of our house by the front door. They were shaving their heads. Logically. After we firmly told them to scram, we pretty much laughed for an hour.

Another time, while Brandon and I were dating, we were arguing in the car outside of a grocery store. As we were arguing, we noticed a one-legged man pull up to the front of the store on a Vespa. A moment later, we heard a scream and saw the one-legged man speeding off after he had maced the grocery store security guard. I don’t remember what we were mad about, but it’s hard to stay mad after how hard we laughed.

Most recently, I have been feeling pretty overwhelmed. My job is lots of little tasks strung together to complete one large project and I can get pretty bogged down in the details. It has been easy for me to get wrapped up in minutiae of planning and executing each little task while losing sight of the bigger picture. Last week I attended a meeting with people with my same position at other schools. We were all discussing the difficulties of our job when one of the ladies told us about a recent problem. Her school is in a rather eclectic, artistic community, and people have been breaking down the doors wanting to teach her students different activities. Apparently, a clown in full costume has been stalking her wanting to start up an after-school club teaching students how to make balloon animals. At least once a week she finds him sitting in her office. Another woman came wanting to start a Manifesting Club. But the one that threw us into a fit of laughter was the group wanting to teach unicycle football.

Thankfully, God has a sense humor that has kept me from many a nervous breakdown. Whenever I’m feeling overwhelmed, I just need to keep an eye out for some chuckles that God is sending my way. If I’m not paying attention, I could miss unicycle basketball.