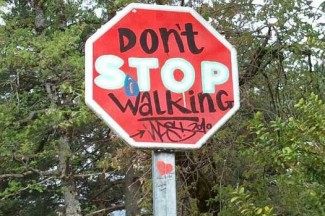 The trail marker was ambiguous. I thought it pointed to the mowed path off to our right. My new friend Michel thought it meant we were to stay on the paved road we were on. I recalled that my map indicated we’d be walking along a road for most of the day, so I listened to Michel, but was nervous we were going the wrong way. Walking through the Pyrenees with 22 pounds on my back, I didn’t want to have to backtrack.

“Is this the right way?” I asked God in my head.

“Can’t you just show me another trail marker so I feel better?”

“Follow Michel,” he said. God often has to repeat things for me. I’m not the best at believing him the first time — or the fifth.

So I followed the Frenchman I’d met only an hour earlier. He had come up quickly behind me as I struggled up the mountain road. We greeted each other after which I thought he’d be on his way. But he slowed his pace to mine and we traded life stories. As I conversed with him in French, I thought of Madame Gold and Madame Calenti — my French teachers in high school — and how much I appreciated their instruction at this very moment. If we were indeed lost, at least I had someone to talk to and help me get back on track.

Neither Michel nor I had ever walked the Camino before. So why did I trust him? Well, God said to. And Michel was confident and convincing despite my obvious apprehensions. And if I’m going to be lost on the Camino, I’d rather be lost with someone than alone.

We walked further along. “Please tell me we’re on the right path,” I said to God.

A few minutes later, Michel pointed to a very faded trail mark — red paint barely visible on a large rock on the road side. He was encouraged. I was thinking, “Maybe they changed the trail, tried to remove the mark, but didn’t get it all off.”

“You’re sure this is right?” I asked God.

“Follow Michel,” he told me again. Not in a commanding tone, not frustrated by this being my fourth time asking him the same question. He’s used to repeating his messages to me.

A few minutes later, there it was. A clear sign indicating we were, in fact, on the right path. Relief flooded by body. “Oh, thank you,” I said. God was silent. I’m sure he was smiling and doing his best not to say “I told you so!”

God sends me “signs” all the time. Ideally, I see them and trust in them. Sometimes they’re clear as day standing in my path and I still refuse to see them. Other times they appear ambiguous to me. In which case, God sends help. On that second day on the Camino, help came in the form of Michel.
____________________
Are there signs you’re ignoring? Are there signs that appear to be ambiguous? Take some time to recognize the help God sends when the sign isn’t clear to you.