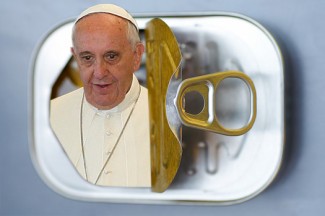 “I remember in Brazil, they’d provided for me an enclosed Popemobile, but I cannot greet the people and tell them I love them inside a sardine can, even if it is made of glass. For me it is a wall.” — Pope Francis to La Vanguardia, a Spanish newspaper

We’ve got one cool pope. The guy greets large crowds all the time, kisses kids on the head, drinks coffee from strangers, and reportedly sneaks out at night to visit the homeless.

So, perhaps the popemobile, a vehicle with bulletproof glass on all sides, is sending the wrong message.

I remember when the popemobile first arrived on the scene after the attempted assassination of John Paul II. We all thought it was kind of cool, but it did seem to restrict the movements of a very vibrant pope.

Restrictions are something Pope Francis would like to avoid, and furthermore, Pope Francis knows the risks. In the recent Vanguardia article, he also notes his age and realizes that he may not have too many opportunities to bring the love of the pope so directly to others.

“It is true something could happen to me but let’s be realistic, at my age I don’t have much to lose,” Pope Francis said, “I know what could happen, but it is in God’s hands.”

Young people should take note of what the pope is saying here, as should those we dub “helicopter parents”: We can’t stop bad things from happening. The world is a precarious place and a great sign of our faith is that we go forth into it unafraid. We spend far too much of our time in fear. Pope Francis senses this and is trying to help us be less afraid of one another.

Fear, however, often creeps back in, doesn’t it?

I just returned from El Salvador, where I worried about safety concerns in a country that has problems with violent gangs and is ravaged by severe poverty. I feared for the nine college students, all young women, who traveled with me and even feared for the Jesuit who was my co-lead mentor.

And for what? It was clearly evil hoping to keep me at bay. “You couldn’t possibly care for these students. You are not strong enough to protect them. If something goes wrong you will not be able to fix it.” All negative thoughts.

Ignatian Spirituality helps to center Pope Francis on the idea of “indifference,” meaning that it doesn’t matter much what happens to us, because God will give us the strength to handle it with God’s help. Even if, God forbid, we die in the process, won’t God redeem that suffering as well?

It’s a great message for our time. It reminds us to not be afraid of others, to move forward, always reaching out in love to our neighbor and not letting fear guide our decisions.

I pray for the pope’s safety, regardless, because there is evil in the world. And there are people who do evil things that even the greatest security force cannot always prevent. But by exposing himself to the possibility that harm could come to him, the Holy Father is also placing himself in solidarity with the world’s poor and vulnerable, who often have no means of protecting themselves. Lots of people walk through dangerous streets daily, wondering if today will be the day that they get jumped and mugged. Gangs harass children until they join and begin to contribute to the chaos they cause. People around the world are confronted with all kinds of evil, and how do they respond?

They face it. Daily. And that is no easy task. Sometimes, bad things do happen. Many times however, the opportunity for good comes along because we were willing to go where we might not always wish to.

It is not easy for Pope Francis to refuse the protection of a bulletproof car. But he is brave enough to realize that while he may be protected from bullets, he also would be choosing to shut people out from the love he has to offer.

A love that we often forget has the power to save the world.