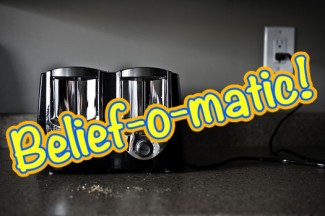 The Belief-o-matic. It sounded like a new-fangled kitchen appliance I would have seen advertised on late night TV — back in 1985. I could see the greasy haired salesman on my screen telling me how simple it was to use: “Insert beliefs and in no time at all, you’ll have the perfect religion!”

But this wasn’t a Home Shopping Network sales pitch — it was a website. As a woman who has struggled with her Catholic faith for a while — so much so that she took off on a 480 mile pilgrimage walk to see what she could discover — the whole process intrigued me. Answer 20 questions and be presented with your perfect religion. No need to call the 800 number on my screen. I could simply insert my name and e-mail address and get started. So I did.

If only it was that easy.

Question 1: What is the number and nature of the deity (God, gods, higher power)?

As I read through the seven answer choices I realized I should have followed the advice I give my students preparing for the SAT: read the question, think about what your answer would be, and only then look at the options to see if your answer is there.

Instead of following the advice I’d given countless times, I read through all the answers. The first one sounded spot on. Only one God. Then I read answer two. It also started with the words Only one God. I compared the answers. The only difference: corporeal or incorporeal spirit. Thankfully, they defined the word corporeal for me — did I think God had a body or not?

Honestly, I’d never really thought about it. Growing up Catholic we learned that Jesus did come to earth as one of us. So he had a body at one point. And since he’s part of the trinity, I guess that still counts. (Sorry Mom — all that Catholic education and I can’t even answer the first question.)

To further confuse myself, I kept reading. Multiple personal gods as facets of one God. A supreme, impersonal force. No God. None of the above. Well, who really knows? I believe in one God. But I don’t mind if others believe in multiple gods. I’ve got a few friends who believe in no God at all, and I still like them and wouldn’t mind being in a community with them. Was I too open-minded for this test? Or for religion in general?

Then I wondered — Does any of this really matter? Well, when trying to decide which of the worlds hundreds of religions you might be interested in, apparently it does.

To further complicate matters, the second question asks Are there human incarnation(s) of God (or gods/goddesses)? Wait a minute — isn’t that the same as the corporeal question that stumped me earlier? This wasn’t good. I couldn’t even decipher the questions, let alone choose an answer.

Like most of those new-fangled kitchen devices for sale on late night TV, the Belief-O-Matic wasn’t as simple to use as advertised. I soldiered on — if anything, just to amuse myself. I answered all the questions as best I could.

A few minutes later I received an e-mail with my results: Catholicism and I were only 33% compatible. If this was eHarmony, Catholicism and I would have never been matched. In fact, based on my answers, there were 22 religions that rated higher. They included everything from Scientology (55%) and Neo-Pagen (86%) to Unitarian Universalism (91%) and Liberal Quakers (100%). I didn’t even know there were Liberal Quakers. Are they like liberal Catholics?

I wasn’t surprised by my results. I know the relationship between me and Catholicism might not last much longer. Like most gadgets for sale on late night TV, I didn’t need the Belief-O-Matic to tell me this. But it certainly gave me some food for thought.

What would the Belief-O-Matic say about you? Try it and let us know your thoughts on your results.