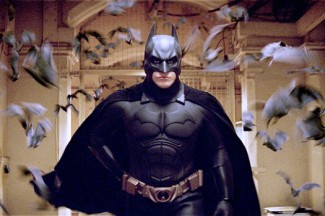 Recently, the Vatican tweeted an article entitled “Holy Switcheroo! Batman has grown bitter, more vengeful with the years.” In it, Adam Shaw discusses the increasing darkness of the character since Bob Kane and Bill Finger created him in 1939. While the Vatican has stated that the tweet was an accident, the article nonetheless remains on the Vatican Communications website and Twitter feed. It also begs the question — in the growing darkness that surrounds Batman in all media (from TV and movies to video games and comic books) is there any room for light?

The short answer, of course, is yes. Otherwise, this article would’ve been called “Batman Dances With the Devil in the Pale Moonlight” instead of “The Not-So Dark Knight.” Still, what does the Bat have to do with the Catholic Church? Let’s take a look at Bruce Wayne’s alter ego in each medium, and see how he stacks up to the Church’s teachings.

Here at Busted Halo® we’ve already discussed Christopher Nolan’s The Dark Knight Rises, but one movie does not a character’s history make. Since the superhero’s debut, Batman has been the focus of at least eight feature films, as well as two serials, one in 1943 and one in 1949. While Adam West’s 1966 Batman film certainly is the campier, more family-friendly sort of entertainment for which Adam Shaw professes love, Christopher Nolan and Christian Bale’s Dark Knight trilogy are not quite how Shaw presents them.

What has shifted is not Batman’s values, but the world around him, and in turn how he deals with that world.

Shaw says Nolan’s Batman “is obsessed with exacting revenge on the criminal underworld” rather than simply pursuing justice. This is how Bale’s Batman gets his start, certainly, but it is not what the character is about. In fact, the major arc of Batman in Batman Begins (and the two movies that followed it) is transformation from a revenge-obsessed vigilante into something more than just a man.

[SPOILERS AHEAD] To do so, Bruce Wayne devotes himself to serving others as the Batman, protecting those who are helpless or ostracized from society (like the little boy at the end of Batman Begins or Selina Kyle in The Dark Knight Rises), and eventually giving his life to save the people who cast him out as a criminal (only to be miraculously “resurrected.”) Gosh, who does that sound like? (It’s Jesus. The answer is Jesus. Click on the link — it’s worth it.)

In regard to Batman on the page, Shaw wrote that “Wayne’s loneliness, moreover, is exploited by villains who have themselves become much more monstrous.” Though it is certainly true that Batman’s villains have gotten darker through the ages (see Neil Gaiman’s Riddler story “When is a Door” in DC Comics’ Secret Origins series for a good example of this phenomenon), it is wrong to say this is in response to Batman’s loneliness. In fact, one could argue that Batman is less lonely now than ever, having not only Robin and Alfred to rely on, but a whole assembled Bat-family comprising of such heroes as Nightwing, Red Robin, Huntress, Batgirl, Catwoman and more.

This family (and the one that Batman creates in the acclaimed series Batman Incorporated) shows Batman’s focus on fostering community with and caring about the people who share his commitment to justice and service — something that could also be said of the Catholic Church.

From its earliest days, Christianity has been rooted strongly in community, service and justice. One of Jesus’ first works as part of his public ministry was to assemble the people who would become his closest friends, the Twelve Apostles. Similarly, after Jesus’ death and resurrection, St. Peter and the other apostles began to amass Jesus’ followers and form the Church itself.

Just as each of us should need to look no further than our community of faith in times of struggle, so too does Batman depend on the people he has accepted as his family when he needs help. This truth permeates all media where Batman is present today: we see the Bat-family in comics (as in the recent Death of the Family arc, where the Joker tries unsuccessfully to attack Batman’s community), in video games (Rocksteady Games’ recent release of Arkham City allows players to command Catwoman, Robin and Nightwing to complement Batman’s sections of the game), on television (Cartoon Network’s animated Batman: The Brave and the Bold centers on Batman’s partnerships with other heroes), and in film (The Dark Knight trilogy displays Batman’s partnerships with Jim Gordon, Harvey Dent, Rachel Dawes and Catwoman, among others).

In short, what Adam Shaw calls a “troubling shift in values” is not quite that. What has shifted is not Batman’s values, but the world around him, and in turn how he deals with that world. Shaw asks “Will the Batman… ever return to his relatively wholesome ways of yesteryear?” And to that, I can only offer this: In my eyes, the Batman is doing the best he can with the world he has. If we can change our world back into one where “zap!” and “pow!” are once again the norm for a crime fighter dressed in a batsuit, then there’s hope that the wholesome and traditional Batman described by Shaw will return.