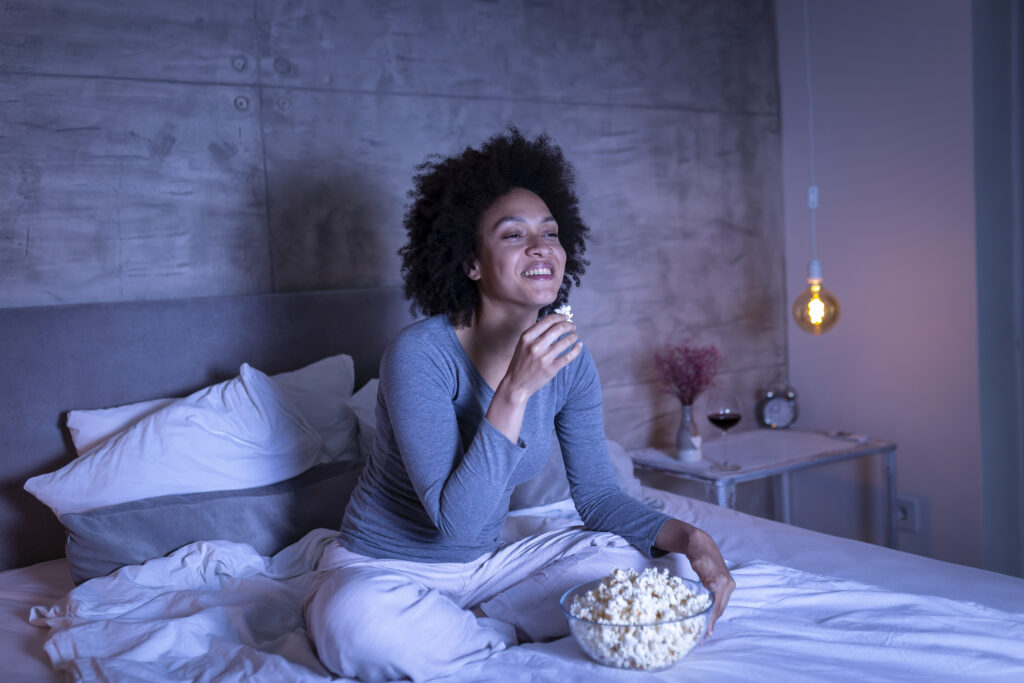 I don’t know about you, but I sure do miss being able to go to the movies. The dimmed lights, the booming volume, even the admonitions to not be a jerk by talking or texting during the movie—I miss it all. But with movie theaters in my area shuttered for months due to COVID-19, in-person moviegoing is pretty much a nonstarter right now.

Even as I mourn the inability to lounge in a theater taking in the latest blockbuster, I’ve been thanking the good Lord for streaming services like Netflix, Amazon Prime, and Hulu. These everything-on-tap bastions of entertainment don’t just let me watch their thousands of movies from the comfort of home. They also offer a hidden benefit: the chance to get more intentional about my entertainment. Rather than choose from the limited options in the theater, I can opt for something with the potential to bolster my faith—or spur some spiritual discussion with the family and friends I’m watching with.

If you’re pondering what to queue up for your next in-home movie night, here are 5 Catholic-themed movies to get you thinking and talking.

Don’t let the subtitles throw you off! This German film offers a fascinating look at the life of St. Hildegard of Bingen. A mystic, musician, and healer who lived around the turn of the first millennium A.D., St. Hildegard served as abbess of a Benedictine convent near the Rhine river. There, she educated nuns in the early arts of herbal medicine. However, as a strong-willed woman, Hildegard often clashed with Church authority. Check this one out for an inspiring portrait of a saint ahead of her time.

The Jesuits have a long history of evangelism around the world, with some of their early missions settled in South America. Inspired by true events, “The Mission” depicts the struggle of a few dedicated priests to continue serving indigenous people in Paraguay—in spite of orders from their superiors to leave. (I won’t spoil all the reasons why. Let’s just say it’s complicated. And very political.) Don’t miss Robert DeNiro’s passionate turn as a criminal-turned-priest, or the gorgeous shots of waterfalls and jungles that won this movie the 1986 Academy Award for Best Cinematography.

Ever heard of Mexico’s Cristero War? If not, this film is a helpful introduction that may have you scouring the internet long after bedtime for more info. (Speaking from personal experience.) In a nutshell, in the 1920s, Mexican president Plutarco Calles sought to enforce the legalized persecution of the Catholic Church. In some areas of the country, the celebration of Mass was suspended and priests were jailed or killed for offering sacraments. As a result, so-called Cristeros—Catholic soldiers—rose up to fight for religious freedom. This one got me thinking about some tough questions: When is it okay to take up arms to defend our faith? What is the best response to the forces that threaten religious expression, even today?

Sometimes you just need a sweet saint biopic to lift your spirits. That’s exactly what 1943’s “Song of Bernadette” always does for me. This one offers an overview of the brief life of St. Bernadette Soubirous, the young French woman whose visions of the Blessed Mother established Lourdes as a place of healing and hope for Catholics worldwide. While many of Bernadette’s contemporaries believed in her visions, others did not. In fact, she was nearly institutionalized for her claims. It’s always interesting to reflect on what I would do if I saw things no one else did. Would I think I was crazy? Or would I stand on the faith that these visions were divinely inspired?

Speaking of movies that’ll make you ask, “What would I do in that situation?” here’s the mac daddy of them all: Martin Scorcese’s epic “Silence.” Two Jesuit missionaries (played by Andrew Garfield and Adam Driver) arrive in Japan in the 1600s to preach the Gospel in an extremely hostile environment. Japanese officials torture and kill believers in front of the priests—with the promise that these horrors will stop if the clergy will only renounce their faith. It’s a tough movie to watch, not gonna lie, but it’ll definitely start meaningful discussion that may strengthen your resolve to hold on to your own faith, no matter what.