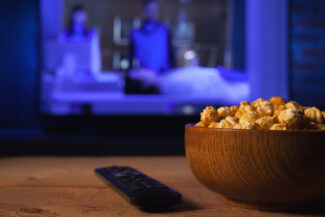 In recent years, the phenomenon of binge-watching cheesy, cliché Christmas movies during the Advent season has really taken off, with Hallmark and Lifetime leading the charge. This programming has been so popular that Netflix, Amazon, and others are trying to get in on the action. You can easily watch a different made-for-TV Christmas movie every night from Black Friday to Epiphany and never watch the same one twice…it’ll just feel like you have!

Although it’s not likely we’ll see a similar national pastime develop around Lenten-themed movies, below is a list of must-see Catholic films that you can build your own Lenten movie marathon around. (Spoiler alert: You should expect less ice-skating, fewer bed & breakfasts, and not nearly as many New England small town holiday festivals in these offerings.)

This is the movie that inspired this list. My Aunt Toni told me how she began watching this movie every Lent a few years back, and I took the idea to heart. The movie stars real-life father-and-son team Martin Sheen and Emilio Estevez playing on-screen father Tom and son Daniel. Daniel walks the Camino de Santiago and passes away during the pilgrimage. The movie begins with Tom traveling to France to retrieve Daniel’s body, not fully understanding what his son was doing in Europe. Tom spontaneously ends up embarking on the pilgrimage in honor of his son, joining with fellow pilgrims, and having a spiritual awakening along the way. Tom’s rekindled spirituality from a fallen faith fits in well with the Lenten theme of renewal.

A former pastor once equated the season of Lent to baseball’s spring training — a time to revisit the basics and build hope for the future. For me, this documentary did just that. The film captures many of the topics that Pope Francis has written about in his encyclicals – charity, mercy, the family, holiness, the environment – all within an accessible, visually stunning package. I came away from this movie reminded of Pope Francis’ initial popular appeal and in awe of the vastness of many of our world’s challenges. The sea of humanity, in all of its forms, that Pope Francis confronts every day is astounding. For a snapshot of the worldview of the Catholic Church, check out this movie.

This will forever be in my memory as “That one where Debra Messing plays Mary Magdalene.” This depiction of the life of Jesus originated as a TV miniseries in the late ‘90s, but is now available on DVD or through streaming services. This rendition, which recounts some of the more popular Gospel stories (The Wedding at Cana, The Sermon on the Mount, Jesus walking on water, and The Last Supper), really humanizes Jesus Christ. He is shown laughing, joking around with the apostles, responding to hecklers during his preaching, and experiencing very human feelings and conversations, like when he tells Mary of Bethany that he cannot start a relationship with her. Another nice added touch is that Jesus’ earthly father Joseph gets a speaking role in this account, unlike in the Bible. This film does a great job of bringing the Lenten Scripture readings to life.

This film tells the story of the early life of Bart Millard, frontman for the contemporary Christian music group MercyMe, who suffered physical and emotional abuse at the hands of his father during his childhood. So much more than the story behind the hit song of the same name, this movie depicts forgiveness in very real-world messy situations, it is showcasing the way that faith in God can turn lives around, and it is a portrayal of lifelong friendship and love. The themes of forgiveness and spiritual growth alone make this a perfect addition to your Lenten observance.

So many theatrical interpretations of the Gospels end with the resurrection, but this film takes a different approach. I like that in retelling the story of Saul’s conversion, we get a portrait of the early Church immediately after Jesus’ ascension. Purists will point out the discrepancies in reenacting the Scriptural accounts of these stories (for example, during the Pentecost scene, the Holy Spirit is shown only as wind with no tongues of fire, and the disciples do not speak in various tongues as the Scripture indicates). However, for me, there were enough scenes that brought the biblical narratives to life to make it worthwhile – the aforementioned Pentecost account, the Disciples struggling with issues concerning Jewish versus Gentile converts to Christianity, and the Apostles fanning out across the Roman Empire to spread the news of Jesus Christ. I also appreciate that the movie does not dwell on gratuitous depictions of the Christian persecutions taking place at the time, making this film, available to watch on Amazon Prime, family-friendly.

I intentionally limited my list above to relatively recent offerings that may not have caught your attention yet. Of course, classics like “The Mission” (1986), “Lilies of the Field” (1963), “The Song of Bernadette” (1943), “The Ten Commandments” (1956), “The Passion of the Christ” (2004) or “Jesus of Nazareth” (1977) could also be included to round out your marathon. Admittedly though, you could watch my whole list and not see a single flannel shirt-wearing suitor stuck in his hometown until after the annual Easter parade.