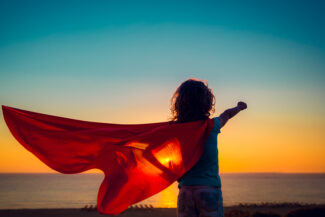 Growing up, it wasn’t easy for me to fit in. I was always “weird.” (I still am.) I liked what I liked regardless of whether it was popular or if anyone else liked it. The two topics I was most interested in were my Catholic Christian faith and nerdy things, but it’s hard to find an adult with the fortitude to have an in-depth conversation about cartoons or comic books. Until recently, it wasn’t easy to find friends in either of those groups who are fans of the other, especially as a full-time pastoral associate at a large parish. Amazingly, I’ve found (or been found by) small pockets of folks whose interests intersect each, and surprisingly, they are people in ministry, too!

I knew I was truly home in my current parish when, at a meeting, someone said, “But everything changed…” And my boss piped in, “when the Fire Nation attacked.” I was thinking it, but he got that reference to “Avatar: The Last Airbender” out first. That same boss (who is my pastor) recently acquired four angel statues that are 100% Weeping Angels as seen on “Doctor Who.” I was truly validated when one Protestant minister after another, as they arrived for our interfaith clergy meeting, said, “Hey, what’s up with the Weeping Angels?”

Every superhero has a sense that they’ve been given their powers for a reason—and many are aware of being specifically chosen for the role that they’ll play in the universe. From Superman to Loki, they were born to fulfill a purpose. Christianity has that sense, too. My Catholic faith tells me that each of us has been sculpted with particular gifts and abilities to be used for serving others. I was taught from my youth that God intends heaven to be everyone’s destiny, but also that I have a personal destiny to fulfill on earth—an irreplaceable mark to make on this earth that no one else could make. I’ve been told (often with very confused looks), that nobody looks at the world quite like I do, so the connections I make in my writing are unique, and they have helped others look at things differently, too.

Heroes of every genre have one common goal — justice. The Tick, more than any hero I can think of, is so justice-focused that he doesn’t think twice about putting himself in harm’s way to stop the bad guys. Whether The Idea Men are seconds away from blowing up The City’s dam, or Chairface Chippendale is carving his name into the moon, The Tick will jump into danger to save the innocent. The Judeo-Christian faith is all about justice, too. For God, justice is taking care of those who can’t take care of themselves; especially the widows, orphans, and the most vulnerable of society. We can take a page out of The Tick’s playbook to remember who we’re called to be as Christians.

When you risk your life for the safety and well-being of others, you sacrifice a lot. Many among the superhero community have alter-egos to hide their true identity. They can never truly be themselves and have to explain away their absence when danger strikes. Heroes also routinely put the needs of others above the niceties of a regular life. In “The Lord of the Rings,” Frodo and Sam sacrifice the comfort of their Shire life, and nearly their actual lives, to go on a truly arduous journey to save Middle-earth. Jesus sacrificed himself for the sake of humanity, and, likewise, we’re called to sacrifice some of our comfort, our money, our time, and sometimes even our personal safety to care for those in need. Like with Jesus, and our heroes, taking up our cross means putting the needs of others before our own.

Sacrifice isn’t easy, and often it’s the result of much internal wrestling. Darth Vader’s struggle between the Dark Side that had almost completely consumed him and his son whose love called him back to becoming himself again was epic. Aquaman’s struggle about what world he belongs to (the earth or the sea) and where his allegiance should make him a little grumpy (okay, a lot grumpy). Everybody struggles. I want to be good. I try to be good. But it’s almost never easy. When I’m committed to an event and something I’d rather be doing comes along, I could be tempted to ditch the responsibility and do the fun thing. When I’m tired and someone wants my attention, I can very easily be tempted to blow them off. Love (God) requires us to have choices, and choices can mean the temptation to not always do what’s right. Every Christian experience the pull away from what God made us for and has to make choices about who they want to be.

One of my favorite shows is “Doctor Who.” It expresses a constant theme of hope. If The Doctor didn’t have hope that he could make recompense for destroying his home planet and presumably the Daleks, he probably wouldn’t have continued traveling through time and space to help those in trouble. Hope is a driving force for people who are called to action. Hope is ultimately the difference between what makes a good guy and a bad guy. For Christians, what makes our suffering, sacrifice, repentance—everything that we do—worthwhile is our hope in God’s unconditional love and in the Resurrection.

The more I interact with nerd culture, the more I appreciate my faith, and vice versa. Having friends who can share fandoms and plumb the depths of their meaning, watching TV shows and movies with my kids and then talking about the moral and theological implications of the stories, using nerd culture references to teach RCIA; all of this stoke the fires of my theological and fanciful imaginations. Both worlds challenge me to be my best self and to hope to do something amazing with my life. Do they challenge you?