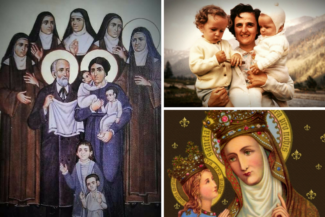 It’s fair to say the saints have taken over our home. I am up to five statues of Mary in my kitchen alone, all cheering me on through daily chores. An image of Mary Magdalene gazes down at us in the dining room. St. Anne is on my night table, reminding me to read my books. My son sleeps with St. Michael the Archangel next to him for protection, and my daughter has a quote from St. Catherine of Siena on her wall. Since we look to the saints for daily inspiration, it was natural that I would turn to them to find help being a good mom. What I learned is that there are relatively few saint moms, and their paths to holiness were shockingly similar.

So, if you want to be a saint and a mom, prepare your family. You probably won’t be getting canonized unless your husband dies, you sell all your possessions, and become a nun. Sorry, kids. Mom won’t be around to babysit the grandchildren. She is doing the Lord’s work.

Step one: Be born into a wealthy family.

Step two: You must get married. An unhappy marriage is optional but preferred. Bonus points if your in-laws are also notably mean to you.

Step three: Have some children, who will likely die young or go into religious life themselves.

Step four: Your husband must die or you must mutually decide to enter separate religious orders. (My husband and I were going to do this for Valentine’s Day but spiritual attack in the form of pizza and Netflix intervened.)

Step five: You must enter religious life or live in a convent that you support. Founding your own order is optional. Even in the New World, the first American-born saint mom, Elizabeth Ann Seton, was raised in a wealthy family, lost her husband, and founded a religious order.

Reading all of this, I began to wonder if there was any hope for the rest us. I did discover a FastPass to mom sainthood that did not involve wealth or a convent. Unfortunately, it requires martyrdom (see “Marytrs of Kyoto” or “Spanish Civil War”). Ready to sign up?

RELATED: Getting by with Help from a Little Flower

Are entering the convent and/or being martyred really the only way moms can become saints? We are all called to become saints, and having the saints as spiritual examples is one of the best things about Catholicism. However, for the average mom today, it’s hard to relate to the experiences of our saint mom role models. Of course, we can always look to Our Lady and St. Anne, but it’s fair to say their circumstances were unique. I began to wonder if this phenomenon was the spiritual equivalent of not having any pictures of yourself alone after your children are born. There may be plenty of saint moms out there, but they are the ones taking the pictures; they are not in them. Until recently, it was accepted that most saint moms toiled behind the scenes with little recognition.

Take heart, Catholic moms. As women’s roles have become better understood and more visible, a new wave of saint moms is coming. Two of the most popular mom saints today, St. Zelie Martin and St. Gianna Molla, not only have cool names, but they were working moms with kids, and are more relatable to most of us. St. Zelie and her husband, St. Louis Martin, were the first married couple to be canonized in history and are best known for being the parents of St. Therese of Lisieux, the Little Flower. Not only did Zelie have nine children, most of whom went into religious life, but she ran her own lace business — before Etsy.

A working pediatrician with four kids, St. Gianna Molla famously refused treatments for cancer so that she could give birth to her daughter. She ended up dying from complications following the birth. Interestingly, none of the Molla children entered religious life, but the youngest daughter followed in her mother’s footsteps and became a doctor.

Both Zelie and Gianna were noted for their ability to live out their faith in everyday life. Zelie’s letters are filled with references to fasting, prayers with the family, and daily Mass. Just like my kitchen, the Martin family had a statue of Mary in an honored place, fondly referred to as “Our Lady of the Smile.” Gianna considered her work her religious mission and her marriage and family as her vocation. She was noted for her care of the poor and marginalized but also for her spirit of joy that served as an example to her children.

It can be hard for us to see the holiness of our everyday actions, especially when we’re struggling to get the kids in the car for Mass, cleaning glitter slime out of the sink, or refereeing the latest cage match between siblings. It helps to see the Church’s recognition of the sanctity of motherhood is growing and maturing with each new saint mom. I can’t wait to see who is next. Could it be you?