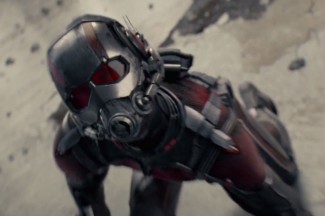 In “Ant-Man,” the latest addition to the ever–growing Marvel cinematic universe, our hero is not exactly a conventional one. In fact, he’s more like you and me than most characters to bear the title of superhero. Scott Lang, played by Paul Rudd, is an ex-con recently released from San Quentin and looking for work so that he can continue to pay child support and reconnect with his daughter and ex-wife. Notably, the typically more comedy-oriented Rudd plays the role of Lang with remarkable depth, a role that’s not too far from Chris Pratt as Star-Lord in “Guardians of the Galaxy.” In short, Lang’s no Superman, but he’s doing his best. Sometimes, though, even doing one’s best just isn’t enough.

When Scott fails to find a steady job, he sees no choice but to go back to stealing in order to get by. That’s when he catches the eye of Hank Pym (Michael Douglas), inventor of the shrinking molecules called Pym Particles, and Pym invites him to take on the superhero identity of Ant-Man. It turns out that a skilled thief like Lang is just the kind of person Pym needs to help him steal back one of his inventions out of the wrong hands and save the world.

Now, I’d love to tell you that this launches Scott Lang into a massive redemption arc where he cleans up his act, learns how to be Ant-Man, steals the tech flawlessly, saves the world, and is reunited with his ex-wife and daughter as one big happy family. But (not really spoilers) that’s not how it plays out. In fact, like many of us would, Lang adamantly tries to avoid accepting Pym’s offer. He tells Pym that he’s got the wrong guy. That he isn’t cut out for heroics and saving the world. He feels like he’s not good enough.

How often does this feeling creep into our own lives? The worry that maybe we’re just not cut out for the things we want to do or the things others expect of us? It is this that makes “Ant-Man” possibly the most relatable Marvel film yet. This movie doesn’t show us our hero as an impenetrable force or a crusader doing good for good’s sake. He’s just a guy — just a normal person who has doubts about the future and concerns for his own ability to make it through.

“Ant-Man” takes on heroism on a much smaller scale than other superhero movies (pardon the pun), but in doing so it creates a more realistic portrayal of what really makes a hero. It’s not about leaping over tall buildings or stopping an apocalypse-level catastrophe. In the real world, being a hero can come down to something as basic as having the courage to face your own doubts and fears and do what’s right.

And just when Lang is feeling his lowest, he finds that courage. Scott Lang isn’t trying to be a superhero. Lang becomes Ant-Man because it’s all he’s got, because (as Hank Pym tells him at one point in the movie) “Second chances don’t come around all that often. I suggest you take a really close look at it. This is your chance to earn that look in your daughter’s eyes, to become the hero that she already thinks you are.”

Who doesn’t love second chances? Even though Lang has his doubts about it, he presses forward, not just because it’s the right thing to do, but because he knows it’s what he has to do to keep the people he loves safe. He’s not striving for the glory or admiration of millions or even the pursuit of any “greater good.” There’s definitely no “Truth, Justice, and the American Way” here, but it’s the more realistic view of what it means to be a hero that makes “Ant-Man” a powerful film.