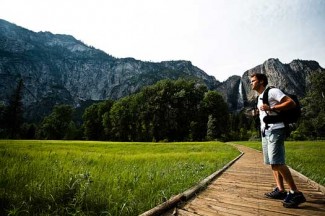 When I told friends I was going to walk the Camino to Santiago, they would ask, “Is it like the AT?”

“No — I could never walk the Appalachian Trail!” I said. “The Camino is easier because I don’t have to carry a tent or food. You walk through towns, stay in hostels, and eat in restaurants.”

For those that don’t know, the Appalachian Trail extends more than 2,000 miles from Georgia to Maine. A couple thousand people set out each year with the goal of hiking the whole route in five to seven months. On the AT, these “thru-hikers” could go days without seeing civilization. By comparison, I walked 500 miles on the Camino over the course of 37 days and rested my head each night in some sweet Spanish town, on a bed, after taking a hot shower.

Growing up 30 miles from the AT, I feel like I’ve known of its existence nearly all my life. But my first true introduction came by way of a book: Bill Bryson’s A Walk in The Woods. As I read it, I thought, “I could never do this.”

I made it. But it wasn’t pretty. By the time I got to the top of the Grand Canyon the tears were flowing. My legs ached, despite the fact that I was carrying an empty pack. Empty because my sympathetic boyfriend took everything out of it and put it in his so I could make it to the top unencumbered.

At that point, if you’d have told me I’d find myself, 10 years later, embarking on a 500-mile pilgrimage walk across Spain I would have laughed out loud as I dried the tears from my cheeks.

There are many stories of people doing something that, at first glance, they thought they could never do. Bookstores are filled with such accounts. Mothers read such tales to their children and adults can find true stories in the memoir section of any bookstore: Cheryl Strayed’s bestseller Wild tells of her unlikely hike along the Pacific Crest Trail, Aron Ralston’s 127 hours recounts the circumstances that led to his decision to cut off his right arm to save his life while pinned in a canyon.

World religions have their own “never say never” moments — parables written or passed down. A blind man being healed; Abraham willing to sacrifice his son.

Each of us probably has a story of our own to tell. I think of a friend who never imagined she would be raising a child with special needs, let alone fighting for him to get an education. How many stories do we hear of other people’s trials and think, “I could never do that.” But when presented with what life throws at us, it’s amazing what we do that we never thought we could.

On a lighter note, another friend told me she could never live more than a few miles from a Dunkin’ Donuts. Then, she fell in love. And now lives in the middle of nowhere — quite far from most everything, including Dunkin’ Donuts. Then there’s me: a vegetarian who once said she could never even so much as date someone who was a vegetarian (as she wouldn’t know what to cook for him), let alone become one herself.

So I’m more careful now about using the word “never.” Who am I to predict what I may do, want, be in 10 years? What I could and couldn’t handle?

For all I know, one day I may be writing this column from a town along the Appalachian Trail.

What’s something you’ve done that you “never” thought you would?