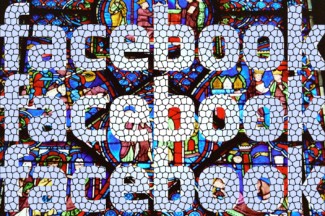 I don’t usually share memes. I have nothing against memes. I just don’t want to be that person: the one who shares nearly every meme; the person who gets sucked in by a misattributed quote and serene landscape pairing. If I do share a meme, I’ve probably deliberated about doing so for at least five minutes, completed a hasty calculation of my meme-per-week rate, and actually thought it was pretty good, or quite funny.

One meme I did share was NBC’s tweeted photo showing the election of Pope Benedict versus that of Pope Francis. This photo, which was later debunked as misleading, was trying to make a point that technology has rapidly made its permanent home at every historic moment, even the election of a pope. (Nuns with iPads?! I, too, took pause.)

Even if the picture pairing was misleading, the point is still relevant. Technology is changing the way we experience everyday life as well as historical or even tragic moments. Being short, I can’t count the number of times I’ve strained to look over someone’s shoulder and, now, his or her smartphone to see what’s actually going on.

A few weeks ago, a Facebook friend posed a question: “What is the point of religion?” Admittedly, I never answered the status, but I did think about the question. Sure, everyone can have his or her private relationship with God. Why bother to create a formal religion? Why gather on a weekly basis? Why share our thoughts on religion at all, as the subject becomes increasingly taboo?

For me, religion is about realizing that there are some things that are best done together. This comes from a simple criterion I use when evaluating any relationship I’m in, whether a romantic connection or a friendship: Is there something about being in relation to this person that maximizes who I am? On the surface, this might look like dependency. You need another person to become your best self? No, not at all. But there is something inherently relational about us and how we were created. The way we challenge and reinforce one another can maximize each of our potentials. In that sense, our personal relationship with God can be maximized by our interactions with others. Other people can help us become the person God created us to be, challenge us to ask hard questions about injustice, or give us opportunities to practice prudence or forgiveness. Without each other, we may very well lose the communal element of self-formation.

Other people can help us become the person God created us to be, challenge us to ask hard questions about injustice, or give us opportunities to practice prudence or forgiveness. Without each other, we may very well lose the communal element of self-formation. This crucial aspect of community is certainly influenced by social media, now a prevalent way to interact. With this technology, we have hundreds more social interactions on any given day, but what has it done to the quality of those interactions?

This crucial aspect of community is certainly influenced by social media, now a prevalent way to interact. With this technology, we have hundreds more social interactions on any given day, but what has it done to the quality of those interactions?

Not living in the moment. When I first saw the NBC image, I remembered a feeling I have all too often these days: not truly being present. Photography is my hobby, and there is no person who’s more determined to get the perfect shot (and put it on Facebook, of course.) However, somewhere between the weddings and landscapes, I realized I was much more concerned about the photo than I was about the moment. As I reflected on the NBC image, I thought about what I might be doing at the election of the pope. In fact, I know: I’d be straining my neck and my gangly arms, trying to get above someone’s head so I could get one good photo. But what story would I have to tell my friends upon my return? As I was getting the photo, I’d be missing the energy of the moment. Are we truly present at these historic invigorating moments we’re so desperate to capture? Or will we have more images than stories to share when we grow old?

False dialogue. I nearly took a Facebook reprieve when the gun control law was up for a vote. My blood would boil and my whole day would be consumed with debating back and forth under some inflammatory meme. It’s true: technology makes us less inhibited to speak our minds. Yet, as we speak our minds, are we actually having dialogue? In a Church that’s already divided, has social media been a force for cohesion or does it further divide? As we debate issues like gay marriage, abortion, and immigration reform, among others, social media reduces our inhibition to the point that we’re virtually screaming at one another. Does this false, detached confidence serve the true dialogue we need around these issues?

Vulnerability meets compassion. I’ll end with something I believe social media has offered. I’m reminded of the viral prayer phenomenon. Having lived a mile away from the Boston Marathon bombings, my Facebook newsfeed was overwhelmed with messages of support and virtual calls for prayer and healing. There are many prayer requests of a personal nature, too. While many guard the amount of personal information they declare online, they seem somewhat less inhibited with the same information when nested in a request for prayer. Why? What is it about this spiritual element that opens us up when we’d otherwise be cautious or reserved? Can this new openness be part of the grounds for compassion and collective prayer? One of my favorite parts of the Mass is when the priest asks if there are any other intentions. So often, it’s met with silence. Perhaps social media is breaking down those inhibitions, opening up opportunities to pray for one another, deliver a meal, or write a personal message.

At the end of the day, we are left with some difficult questions. Is social media changing the way we experience religion, God and each other? Is it replacing religion altogether, filling the need for community without the dogma? The only thing for certain is that religion, social media and technology are all here to stay. Will they have a synergistic relationship or one that is alienating and isolating? Jesus says in the Gospel, “Where two or three gather in my name, there am I with them.” What would Jesus think about millions gathered in one virtual place? Social media continues to stretch the meaning of the word “community” in our community of believers.