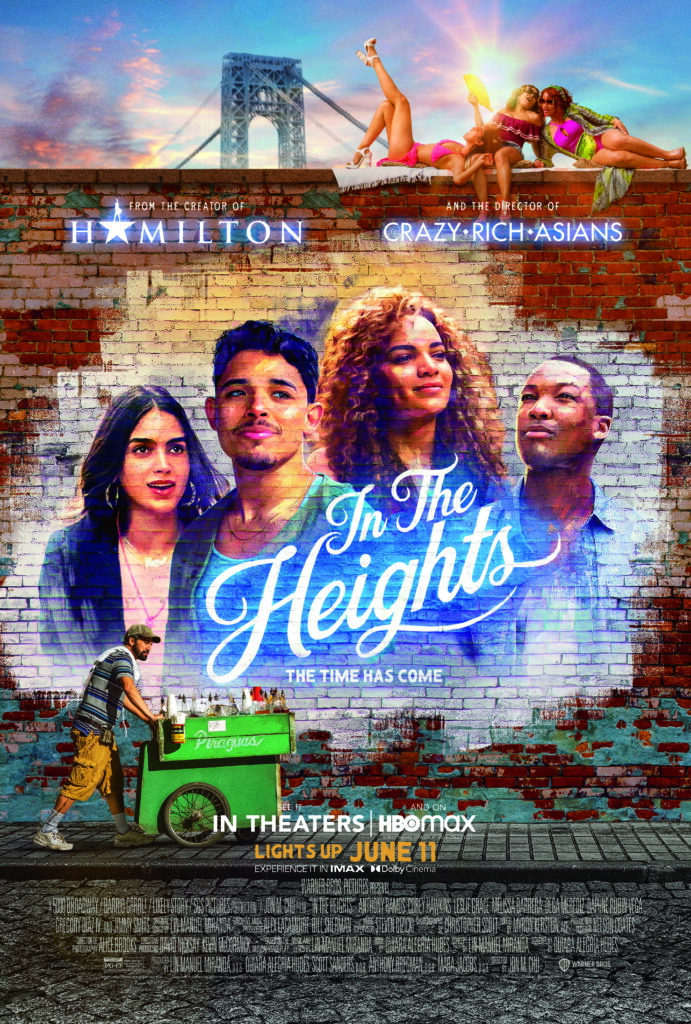 I’ve always been a fan of classic movie musicals like “Singing in the Rain” and “The Sound of Music.” Seeing the actors sing and dance on top of their usual emoting reveals incredible extra layers of talent that leave me in awe. These days, there are only a couple of big musicals each year, if that, so when I heard that the smash-hit, Tony Award-winning Broadway musical “In the Heights” was coming to life on the big screen, I knew I had to see it opening night since I’d never had the chance to catch it on stage.

Not only was I floored by its sense of spectacle, but I was thrilled to find that it offered some really profound messages to consider as well. For one, the lead characters are driven by a sense of spiritual purpose that sets “In The Heights” apart from other blockbusters, outside of a few “faith-based” films that often take a heavy-handed approach to cinematic evangelization. It tells the story of a diverse, tight-knit immigrant community in Washington Heights whose dramatic life decisions are inspired by a simple motto learned from a wise old woman in their neighborhood: “paciencia y fe,” meaning “patience and faith.”

Based on the 2008 smash hit Broadway musical written by Lin-Manuel Miranda, who also created the all-time blockbuster “Hamilton,” “In the Heights” follows the lives of four young immigrants, Usnavi, Vanessa, Sonny and Nina. Each of these dynamic and ambitious characters believes they’re called to leave their working-class neighborhood of Washington Heights for brighter futures in “better” places.

Their ambitions transcend their ethnic backgrounds, and are shared by people of all backgrounds who feel their dreams require them to relocate and leave the life of their childhoods behind. But “Heights” powerfully shows the impact of realizing the beauty found in your present, everyday circumstances and the inherent value of the people and experiences that shape you.

For me, it sparked thoughts of how I never thought in my life that I would work at Wal-Mart, for a myriad of reasons. But when I lost a job I loved at a newspaper after 17 years and couldn’t find other media work, I applied and found that I love it more than I ever enjoyed being an editor.

Being a cashier and joking with customers eight hours a day sparked my creative side and has helped me become a better comedian (another career path of mine). It also led to my doing funny store-closing announcements over the PA system every night, which I film and put on TikTok (@thatfunnywalmartguy). I wound up getting over 60,000 views in my first month alone.

Now, I’ve been invited to submit my proposals for a humorous new national ad campaign and the company is also likely to sponsor a new radio show I’m launching in July. So, the last job I ever thought I’d have is now possibly the best job I’ve ever had – the kind of attitude the movie spotlights.

My journey took the same kind of “patience and faith” the movie sings about. The values are a recurring theme throughout the story, as sung by the wise “abuela” (“grandmother” in Spanish) who is loved by everyone, including those unrelated to her. She repeatedly cites those virtues as the keys to happiness in life. Those key words — “paciencia y fe” — appear throughout the story: from dialogue exchanges to a powerful song she sings, to a painted mural that brings the film to a touching conclusion. I loved the message of those words because I realized that patience and faith were qualities I’ve been experiencing a lot in my major career transition.

RELATED: Praying for Patience: What I Learned From God’s Time Vs. My Own

I have never set foot in Washington Heights, yet I found “In the Heights” to be such a bracing experience that I saw it twice in its first week and loved it even more the second time.

The film’s vibrant, emotional portrayals of the immigrant experience deeply affected me because I myself am the son of a Polish immigrant who pursued his own American Dream to become a Veterans’ Affairs doctor. In showing the challenges these characters face on a daily basis, the movie moved me to have a more open heart towards immigration issues than I normally harbored as a political conservative.

I could see myself in the four lead characters. Growing up in Little Rock, Arkansas, I was driven by a love of comedy and couldn’t wait for my eventual moves to Chicago and Los Angeles to pursue a career as a standup comedian and writer. But when I was laid off from my job at the weekly newspaper in 2019, I moved back home and was surprised to find that I now appreciated myriad things about life in a smaller city and surrounded by family.

I also was inspired by the fact that these young people are all immigrants or the children of immigrants, just like I am. Watching one father in the movie give up everything so that his daughter could achieve a dream education at a top university made me appreciate how my parents managed to put me and my three siblings through college even after my dad started in America with nothing.

It’s refreshing in a time when so much of media can be cynical, to find a movie that finds beauty and value in family and faith. In coming home myself, I thought I had to leave all my dreams of performing behind – yet instead, I’ve managed to find some amazing new opportunities here in this small city that I grew up thinking had none to offer. God had a plan for me right where I was if I paid close enough attention.

“In the Heights” has the magic ability to make any viewer appreciate the life and family they have, while calling them to find their own higher purpose. That’s a pretty impressive feat any time of year, and hopefully one that will leave all theatergoers as inspired as the film left me.